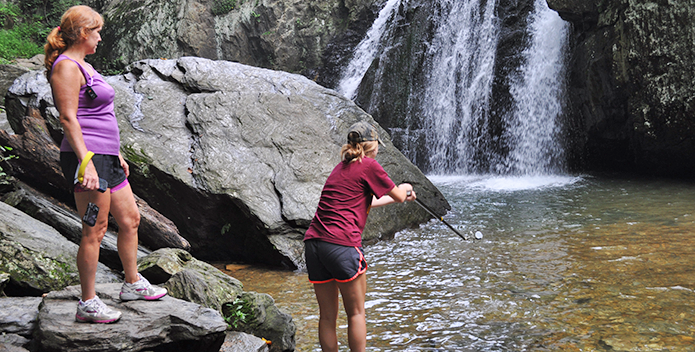 Professor Tami Imbierowicz of Harford Community College oversees her daughter Stephanie as she takes a water sample at Kilgore Falls in Harford County.

Choose an image to display

It's hot. The water looks clear and cool. With joyful summer abandon, you take the plunge. But our streams and rivers sometimes are unsafe for swimming, and water play after a summer thunderstorm. A significant storm can wash human and animal waste from farms, city streets and elsewhere into local streams. After rain storms bacteria levels can rise above safety levels established by state and federal governments. That's the conclusion of water tests conducted this summer in three states by the Chesapeake Bay Foundation (CBF).

These results confirm the need to clean up our streams and rivers, and the Chesapeake Bay. Bacteria is a canary in the coal mine. Where you find fecal bacteria, you likely will find nitrogen, phosphorus, and sediment pollution, three of the main sources of pollution in the Bay and its tributaries. We clearly must follow the regional plan to clean the Bay and its drainage area–a plan we call the Chesapeake Clean Water Blueprint.

We're not saying don't go in the water. But until we're successful in cleaning up the pollution in our waters, we might want to heed a recommendation made by some local health departments, and state environmental agencies: consider waiting 48 hours after a big storm before swimming in any stream, river, or the Chesapeake Bay.

Take a look at results from:

Our findings clearly indicate much more needs to be done to reduce runoff pollution. Keep livestock away from streams. Upgrade drainage systems to treat polluted runoff rather than just flush it downstream. Start programs to educate citizens about picking up pet waste and installing rain gardens and rain barrels at home. There are plenty of cost-effective actions governments can take, from installing permeable pavers to daylighting urban streams. However, too many waterways across the region still have dangerously high levels of bacteria after heavy rainfalls.

These findings don't necessarily reflect the condition of all streams in the three states. We couldn't possibly sample everywhere. Residents shouldn't use our data to try to determine if or when it is safe to recreate in their favorite streams. But they can use the rule of thumb to wait for 48 hours before swimming after a significant storm, particularly in areas that are not regularly monitored for bacteria.

Polluted runoff is water that runs off the land during and after a storm. The water often picks up contaminants—manure from livestock, dog waste, weed killer, and other impurities. The runoff often goes directly into local streams and rivers without any treatment. This can make for unhealthy conditions where people use streams for recreation. Conditions in a free-flowing, fresh water stream change constantly, but the U.S. Environmental Protection Agency estimates that 39 percent of assessed rivers and streams are not clean enough for recreational uses.

Our project looked for local, recent, bacteria counts in Pennsylvania, Maryland, and Virginia. We tested for the presence of a certain type of indicator bacteria in the water—enterococci or E. coli, depending on the salinity of the water. Both of these bacteria serve as indicators of fecal contamination in the water, as well as other likely pollution.

We picked sites indicated in the map above that are known to be used for recreation, or which are representative of streams, creeks and rivers that run through our rural, suburban and urban communities. They may be swimming holes on fresh water streams, community lakes, or other sites. We took samples mostly after storms, but we also monitored some times during dry spells to determine bacteria levels at base flow.

Local governments do typically test for bacteria at dedicated public beach sites during summer months. But those tests typically don't include more informal recreational areas such as swimming holes. With our protocol—testing informal recreation areas specifically after rain storms—we hoped to provide a fuller picture of the impact of polluted runoff on local streams and rivers.

What Can You Do?

Polluted runoff is clearly a serious problem in our region. But there is a solution. It's the Chesapeake Clean Water Blueprint. What's needed is for citizens to insist the solution be implemented.

The three states in our test area—Pennsylvania, Maryland, and Virginia—have each committed to reducing polluted runoff, and other sources of pollution that make our water unfit for recreation after storms, and unfit for aquatic life. This commitment is part of a multi-year plan to improve the health of streams, rivers and the Chesapeake Bay. The Blueprint is that pollution-reduction plan. But Pennsylvania has fallen far behind in its commitment to implement the Blueprint, and all three states have failed to make enough progress reducing polluted runoff in urban and suburban areas