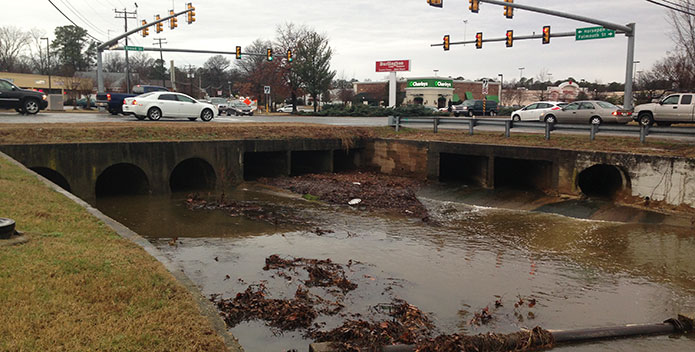 Urban and suburban runoff is the only major source of pollution that is growing in the Chesapeake Bay and its rivers and streams.

Runoff pollution is increasing because the amount of land covered by parking lots, roads, roofs, and driveways, continues to grow. Meanwhile, forests, meadows, and other natural filters are disappearing, and manmade filtration systems to control runoff have not compensated for the loss.

With climate change potentially increasing the amount of precipitation, localized flooding can result as once designated "100-year storms" occur with greater frequency. 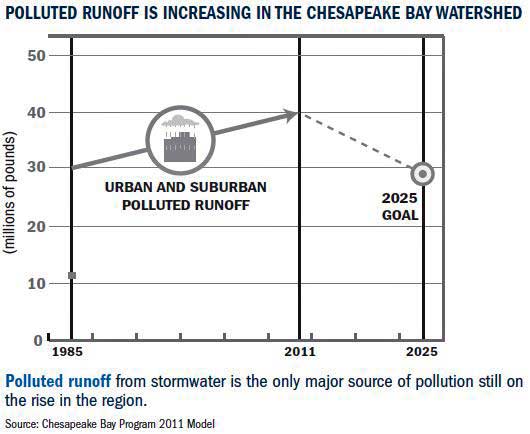 In the Chesapeake Bay watershed, almost 5.4 million acres of land are developed, which is about 13 percent of the land that drains into the estuary. More than a third of this developed land (or 1.9 million acres) is covered in pavement, roofs, and other surfaces that rain cannot penetrate. That means that about three percent of the Bay watershed is covered in impervious surfaces. The percentage of coverage by hard surfaces is much higher in urbanized communities: 51 percent in Baltimore; 46 percent in Washington, D.C.; and 24 percent in Newport News, Virginia. 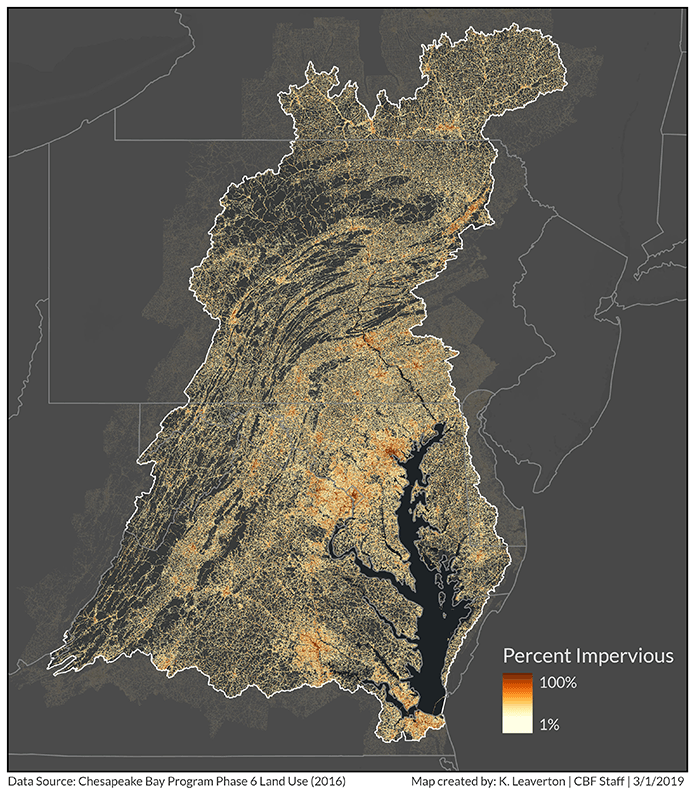 Spread-out development patterns—also known as sprawl—largely comprise the prevailing form of new development across the Bay watershed, although there are signs that the alternative – more compact development within and adjacent to existing urban and suburban areas – is also occurring with more frequency. One of the signs of sprawl is when the rate of land development far exceeds the rate of population growth. In Maryland alone, the population grew by 39 percent but the developed land multiplied by 154 percent between the 1970s and 2010.

Another indication of sprawl is when ex-urban resource land (farmland, forestland, and fallow areas) is regularly being lost. Since 2007, Pennsylvania, Maryland, and Virginia have been losing about 28,000 acres of farmland annually, much of it to development. From 2007-2017, forestland fared better, but forest losses and conversion continued to occur in parts of Virginia and in urbanizing Maryland jurisdictions. Overall, the land development rate averages about 40,000 acres per year across the Bay watershed which, while considerable (equivalent to a city the size of Baltimore), is 0.1 percent of the overall watershed land area each year. Overall, expansion of urban and suburban developed areas explain why this source of nitrogen pollution is still increasing.

"What we do on land goes right into a storm drain and then right into our sources of drinking water and the places where we recreate," according to Richard Batiuk, former Associate Director for Science, Analysis, and Implementation with the U.S. Environmental Protection Agency's Chesapeake Bay Program. “People always think, 'once it disappears, it's okay.' No, it stays around and it comes back and bites you, either through your faucet or an inability to have a meal of rockfish or crabs."

The list of pollutants in runoff is long.  Trash dropped on the street. Nitrogen and phosphorus from fertilizers on lawns and air pollution that settles on the ground. Fecal bacteria, viruses, and other pathogens from animal and human waste. Oil and toxic petroleum products from vehicles and driveway sealants. Pesticides and herbicides from lawns and gardens.  Road salt. Dirt from stream banks and construction sites that lack runoff control fencing. Toxic metals, such as copper, lead, and zinc from vehicles, roofing materials, and paints.

How You Can Help

For more ideas, see "12 Things You Can Do to Clean Up Your Rivers, Streams, and the Chesapeake Bay."