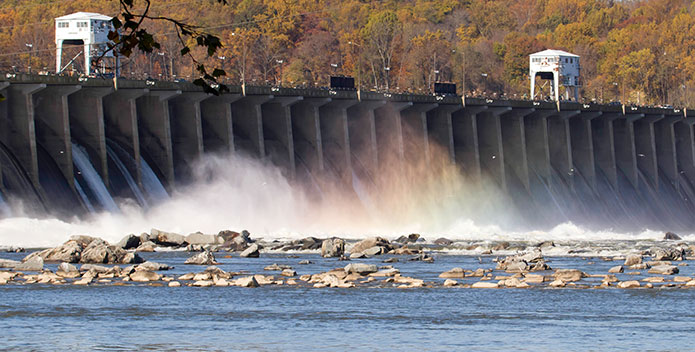 For decades the Conowingo Dam on the Susquehanna River in Maryland trapped much of the sediment and nutrient pollution carried by the river and prevented it from reaching the main stem of the Chesapeake Bay. But now the area behind the dam has silted in, and more quickly than scientists had anticipated. Major storms scour some of that sediment and wash it downstream.

Bay states have agreed to share some of the responsibility for this problem. Maryland Governor Larry Hogan also has ordered that the owner of the dam, Exelon Corp., be accountable for a major portion of the pollution reduction or contribute significant funding.

The Chesapeake Bay Foundation (CBF) has been active for years on the Conowingo issue. CBF most recently advocated for Exelon to pay its fair share of the clean-up costs, since the dam contributes to the problem. Exelon has gone to court to fight the clean-up requirements imposed by Maryland.

The loss of the trapping capacity of the massive dam was not considered and accounted for during the initial development of the Environmental Protection Agency's (EPA) 2010 pollution-reduction targets and watershed states' Watershed Implementation Plans (WIPs) for the Chesapeake Bay. This regional clean-up plan is referred to as the Chesapeake Clean Water Blueprint.

A report of the impacts of the sediments from behind the dam and potential mitigation options and costs was released March 7, 2016, by state officials and the Army Corps of Engineers. Report findings showed that the dam's trapped sediment doesn't present as significant a problem as originally feared, in terms of amount of pollution scoured from behind the dam and delivered to the Bay during big storms. It also affirmed that stopping pollution at its source—the larger Susquehanna Watershed—is the best bet for restoring the Bay's health.

Sediments—sand, silt, and clay particles—making their way past the dam in storms generally settle to the bottom without threatening the Chesapeake Bay water quality or aquatic life, the report concluded. Underwater grass could be threatened by a storm and sediment surge during the growing season. The study also concluded that dredging material from behind the dam would be prohibitively expensive with little environmental benefit.

The bigger threat to the Bay is nutrients coming through the dam, the report concluded. Nitrogen generally dissolves in water so the dam never trapped or prevented much nitrogen from moving downstream to the Bay. But phosphorus is typically associated with sediment particles and was historically trapped by the dam. With the loss of trapping capacity, more phosphorus pollution is reaching downstream waters during storms. The report said the pollution from scouring must be addressed. The most cost-effective solution would be to stop pollution from entering the Susquehanna in the first place, the report concluded.

Exelon's current license to operate the Conowingo was issued on August 14, 1980 and expired on September 1, 2014. Exelon is asking the Federal Energy Regulatory Commission (FERC) for a new license to operate the dam for 46 years. As part of the re-licensing, Exelon had to request a "Section 401 water quality certification" from Maryland. Under this section of the federal Clean Water Act, states must consider potential environmental impacts from the dam and include appropriate conditions in the new FERC permit to minimize these impacts.

Maryland issued its Section 401 water quality certification in April, 2018, but with the condition that Exelon shoulder the main responsibility for reducing nutrient pollution passing through the dam. (Read CBF's statement) The state said Exelon must reduce pollution equivalent to six million pounds of nitrogen and 260,000 pounds of phosphorus a year. The certification said Exelon’s share of the costs could be reduced by amounts contributed by the Bay states. The certificate also ordered Exelon to develop a better plan for releasing water from the dam in order to improve downstream habitat for fish and other marine life. The company also was directed to better aid spawning fish bypass the dam on their way upstream.

Exelon has chosen to challenge the certification in State and federal court.

As the regional watchdog for the Chesapeake Bay, CBF is seeking a comprehensive solution to the Conowingo problem, both to pollution building up at the dam and also entering the Susquehanna River upstream. Since 1986, we have helped reduce pollution coming down the Susquehanna and reaching the dam, but more needs to be done. We continue to caution that the Conowingo is not the only major threat to the Bay’s health, and in fact, has little impact beyond a portion of the main stem of the estuary. Local areas below the dam must continue to do their part.

CBF was involved in the previous relicensing of the dam in the late 1980s, filing comments in support of actions to improve the ability of migratory fish to pass by the dam and access historic upstream habitat—an issue we continue to advocate.

With the current relicensing, CBF filed to intervene in the FERC relicensing of the dam to ensure the Foundation's voice was heard in that process, and to position us for a legal challenge if necessary.

We also submitted comments on the draft Environmental Impact Statement (EIS) issued by FERC on July 30, 2014. The purpose of the EIS is to assess the environmental and economic effects of continuing to operate the facility and make recommendations for how to reduce these negative impacts.

Finally, CBF and The Nature Conservancy commissioned an examination of the dam's finances and used that December 2017 report to support a call for Exelon to make a financial contribution to mitigation efforts. The report concluded Exelon could continue to make a healthy profit from the hydroelectric dam while paying $27 million to $44 million a year toward the cleanup. CBF did not advocate for Exelon to be responsible for the entire cost of the pollution reduction—estimated at over $170 million a year.

Cutting Pollution to the Susquehanna

Focus can't just be on the dam, however. Pennsylvania and New York must do more to reduce sediment, phosphorus, and nitrogen entering the Susquehanna as required by the Chesapeake Clean Water Blueprint. Pennsylvania is significantly off track in reducing nitrogen, phosphorus, and sediment pollution from both agriculture and urban/suburban runoff. New York also is behind in meeting its nitrogen and sediment reduction goals.