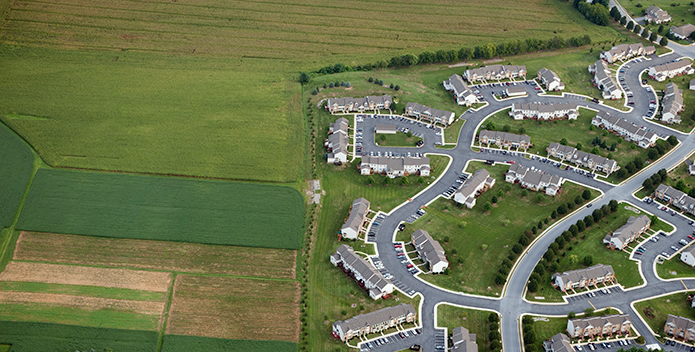 What Happens on the Land Matters to the Bay

The Chesapeake Bay's land-to-water ratio is 15:1—larger than any other coastal estuary in the world. When the land suffers from pollution and poor management the Bay's water quality also worsens.

A profound relationship exists between the water of the Chesapeake Bay and the 64,000 square miles of land comprising the Bay's watershed. Approximately 100,000 rivers and streams run into the Bay. This tributary system directly connects farms, forests, and developed communities in six states and the District of Columbia with the Chesapeake.

Before European settlers began to arrive some 400 years ago, these lands were largely forested with scattered American Indian settlements.Vast forests and wetlands absorbed and filtered rainwater as it ran across the land to the Bay.

As the population of the region grew, so did the Bay's pollution problems. More people meant more pollution pouring into waterways from sewage, traffic, farms, and runoff. Today, there are 18 million residents in the watershed, and the number is expected to grow to 19.4 million by 2025.

What was subtracted from the watershed during historic development was as significant to the Bay’s problems as what was added. By the late 1800s, 40 to 50 percent of the watershed’s forest had been cleared of trees, according to the Chesapeake Bay Program. Between 1982 and 1997, the Bay watershed lost more than 750,000 acres of forestland to development, about 100 acres per day. Wetlands were equally decimated. Nature’s filters were removed from the land.

Unfortunately, much of the growth that continues across the Bay watershed is sprawl: insufficiently managed, scattered, spread-out development. Look at the edges of our suburbs from the air and you will see pockets of subdivisions and strip-malls hop-scotching into previously undeveloped forests, meadows and farmland. Because the development is far from existing communities, the public pays for new road construction and maintenance, as well as fire, police and other services to support this growth. Sprawl also destroys nature’s filters and increases polluted runoff.

A Better Way to Grow

Smart, sustainable growth is an alternative vision. It provides more choices for homebuyers, for instance, to live in areas where schools, restaurants, and other amenities are within walking distance or easy reach via biking and transit, or the occasional short car ride. Smart, sustainable growth also revitalizes existing urban, suburban, and rural communities rather than sprawling into isolated areas of the countryside.

Better managing our growth also means repairing or mitigating the inevitable harm done by development. More pavement and rooftops mean more polluted runoff. That’s rain after it picks up lawn fertilizer, oil, pet wastes, and other contaminants from the developed landscape. The dirty runoff flushes directly and with great force into nearby creeks and streams, ruining them for fish and carrying pollutants downstream. Continued growth in the Bay watershed will add four million pounds of nitrogen to the Bay, according to computer modeling. Planting trees along streams and in urban and suburban areas, creating rain gardens, and using other types of natural filters or "green infrastructure," can help mitigate some of developmen'’s damage, slowing and soaking up runoff—but not putting growth with the wrong design and in the wrong place in the first place is even better.

Smart growth also means saving farms and forests. A farm that is well managed to keep manure, fertilizer and other farm products out of nearby creeks, and to keep its forested areas intact, is better for the environment than a new subdivision that paves the pastures and cropland, bringing more septic systems, polluted runoff, and air and water pollution from traffic on new roads.

Conserving open land and planting additional trees will not only help save the Bay and its aquatic life; it will preserve habitat for animals on land.

CBF firmly believes it is possible to restore the Bay. But the continuing loss of natural filters and vital land-based ecosystems makes restoration of the Bay, and the achievement of the goals of the Chesapeake Clean Water Blueprint, much more difficult to achieve. Smart, sustainable land use is an essential part of the Bay's recovery.

CBF has launched the Keystone Ten Million Trees Partnership in Pennsylvania to significantly increase trees along streams where they can act as pollution buffers.