The State of Today's Menhaden Fishery 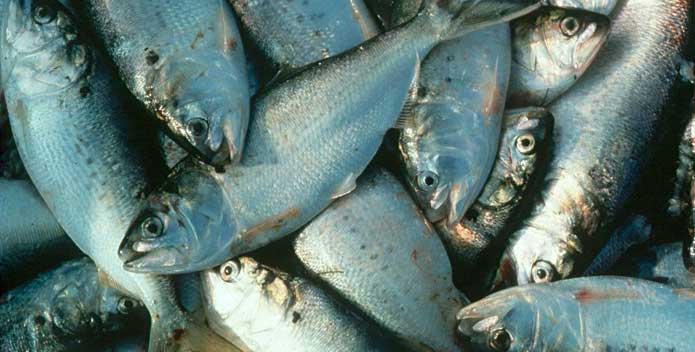 The Atlantic State Marine Fisheries Commission (ASMFC) Menhaden Management Board passed a motion requiring Virginia to maintain its menhaden harvest below the Chesapeake Bay reduction fishery harvest cap. The Board has committed to further assessment of the cap after work is complete on ecological reference points.

Atlantic menhaden have been the number one fishery in the Chesapeake by weight for decades (more than 100,000 metric tons caught each year). Most of the catch is rendered into oil and fish meal for dietary supplements (a process referred to as reduction) and feed for livestock and aquaculture. Whether these are the best uses for such a large harvest is open to debate.  A significantly smaller but important fishery supplies bait, especially for crab pots.

Beside supporting those harvests, this ecologically critical species forms an essential link in the Atlantic coastal food web. Menhaden feed on abundant phytoplankton (tiny, drifting algae cells) and zooplankton (tiny, drifting animals) by swimming in enormous schools through clouds of those plankton, filtering out food that gets caught on their gills. In turn, these little, silvery fish provide a rich food source for a wide range of predators, including fish like striped bass (rockfish) and bluefish, water birds like ospreys and loons, and marine mammals, including bottlenose dolphins and whales. Menhaden are prolific, but all these demands together strain even their tremendous reproductive capabilities. In fact, at the end of 2017, the coastal menhaden population hovers just above its all-time low.

Although the home of the Bay’s menhaden fleet, Reedville, Virginia is one of the top five ports in the country in weight of catch landed annually (#5 in 2016), its rank in dollar value that year was only 35th. Because of concern about the dwindling stock in 2013, the Atlantic States Marine Fisheries Commission (ASMFC) cut the coastwide total allowable catch (TAC) by 20 percent, from 213,500 metric tons to 170,800 metric tons. More recently, improving population assessments have allowed increasing that limit to 216,000 metric tons for the 2018 season. However, because the Chesapeake serves as the most important nursery along the coast for juvenile menhaden, ASMFC has lowered the reduction catch in Virginia’s portion of the Bay from 86,000 metric tons to 51,000 metric tons.

Meanwhile, a scientific process is underway at ASMFC to establish ecological reference points (ERPs) that recognize the ecosystem roles of menhaden in coastal and Bay food webs and set catch limits conservatively enough to keep those food webs healthy. CBF is closely monitoring the ERP effort. We expect it to be completed in 2019, at which time ASMFC will determine how to guide future management of the fishery.