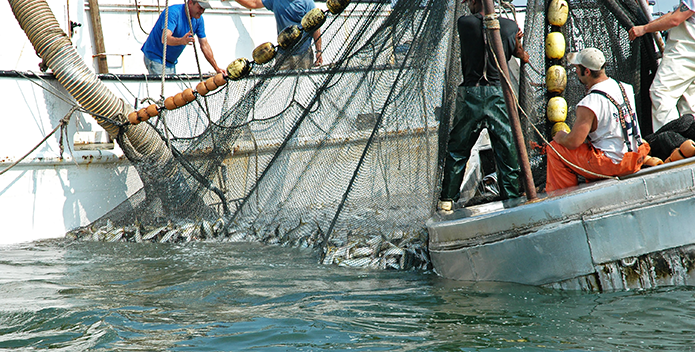 Commercial fishing boats pull up a net chock-full of menhaden.

CBF seeks to apply the lessons learned from history to restore and maintain the Bay's valuable fisheries. We strive to represent the interests of the resource itself, "speaking for the fish" at legislative hearings, in regulatory forums, and directly to fishermen.

The fish and shellfish of the Chesapeake are the most tangible symbol of the Bay, but we the people have taken them for granted, polluting the water they live in, damaging vital habitat like oyster reefs and underwater grass beds, and all too frequently overharvesting them. Historically, we've done a poor job as stewards of these valuable resources. As a result, many of the Chesapeake Bay's fisheries have been reduced in diversity and productivity.

We apply the lessons of fisheries management history to restore and maintain the Bay's valuable fisheries. We focus on what is best for the resources themselves in the fisheries management process, both in the Bay states and coastwide. We take pride in "speaking for the fish" at legislative hearings, in regulatory forums, and directly to fishermen.

Fisheries management is comprised of two basic functions: conservation—determining how many fish, crabs, and oysters can be caught without harming the resource, and allocation—determining who gets to harvest these resources.

Historically, conservation has too often been compromised to satisfy allocation pressures, with the result being depleted fisheries. CBF believes these two functions must be separate, and to advance this fundamental concept, we focus on conservation issues. For conservation to be successful, we believe it must be based on science with input from fishermen. CBF promotes the use of the best available scientific information as the basis for conservation decisions, but when information is incomplete, we advocate caution, erring on the side of the resource.

Shad and herring made up the largest commercial catches in the 1800s, but they are conspicuously absent from today's top ten list. These are anadromous species that live primarily at sea but travel up coastal tributaries to spawn in fresh water. The largest, American shad, had such prolific spawning runs that it was the dominant Bay fishery for nearly 200 years. Largely forgotten now because overfishing and dams blocking their migrations finally snuffed out these runs, American shad have been under catch moratoria for decades.

Find out more about shad

Atlantic menhaden have been the number one fishery in the Chesapeake by weight for decades (more than 100,000 metric tons caught each year). Most of the catch is rendered into oil and fish meal for dietary supplements (a process referred to as reduction) and feed for livestock and aquaculture. Whether these are the best uses for such a large harvest is open to debate.  A significantly smaller but important fishery supplies bait, especially for crab pots.

Although the Chesapeake’s iconic blue crabs have shown steady improvement since a low point in 2014, the 2017 winter dredge survey produced a mixed bag: a record number of adult females, but low juvenile abundance that has led to reduced catches in the fall and likely points to a tough spring for the fishery in 2018. We hope that 2017’s stronger spawning stock of mature females will produce a population increase that provides brighter economic futures to Bayside communities dependent on crabs, like Smith and Tangier Islands.

The oyster fishery reached its height in the late nineteenth century, but unrestrained harvest destroyed the tall reefs that had accumulated over millennia, while pollution and disease drove the stock further down. Fifty years ago, the catch still ranked third among all commercial harvest in the Chesapeake, but it crashed in the 1990s and ‘00s. On the bright side, the harvests have bounced back modestly, exceeding one million bushels total in the 2014-15 and 2015-16 seasons. Virginia’s private harvest, including aquaculture, is growing strongly, but Maryland’s is lagging, and both public (wild) harvests vary but remain much smaller than they were as recently as the 1970s. Today the two-state harvest has risen back to fourth place in the Bay’s fisheries, but the current harvest is still less than five percent of what it was before 1850, and the Bay’s ecological need for this filter feeder demands major restoration.

The news is good, with a healthy dose of caution. Overfishing devastated the Chesapeake’s rockfish stocks in the 1970s, but intensive conservation efforts in the 1980s, ‘90s, and ‘00s restored them to peak historical levels. Rigorous interstate management plans coordinated and enforced by the Atlantic States Marine Fisheries Commission deserve much of the credit for the rebound. However, this favorite fish of both anglers and watermen has now dropped back to a lower—and probably more realistic—level in line with the current carrying capacity of its Bay and coastal habitats.