CBF has long called for greater use of conservation practices on farms throughout the Chesapeake Bay watershed.

But what are these practices and how will they help protect the Bay?

Conservation practices, frequently called best management practices, or BMPs, are tools that farmers can use to reduce soil and fertilizer runoff, properly manage animal waste, and protect water and air quality on their farms. Often these tools can help improve a farmer's bottomline as well by reducing operational costs.

The five most cost-effective conservation practices include:

These practices reduce the most amounts of nitrogen and phosphorus per dollar spent.

It is estimated that widespread use of these five priority practices on Bay region farms could reduce the amount of nitrogen pollution going into the Bay from nonpoint sources by as much as 60 percent. That's why these practices are so important. Well-managed farms can be among the Bay's best friends. 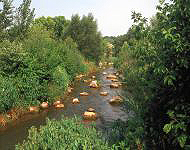 Streamside buffers are areas bordering stream banks that are taken out of crop production or pasture use and planted with native trees, shrubs, or grasses. These buffers are at least 35 feet wide on either side of a stream, and filter and absorb runoff pollution such as excess fertilizer before it can reach streams. The buffers also help shade streams and provide food and homes for wildlife. 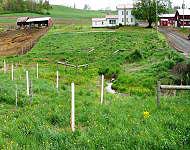 Streamside fencing keeps livestock and their waste out of farm streams, thereby reducing pollution and erosion and helping prevent the spread of waterborne disease. 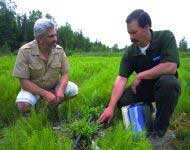 Nutrient Management Plans (NMP) help a farmer know how much and when fertilizers should be used on crops. By developing and using the nutrient management plan, farmers can minimize fertilizer costs and reduce nutrient runoff into local waterways. 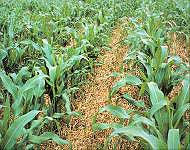 Continuous no-till (also known as conservation tillage) reduces erosion and runoff by minimizing soil disturbances. This practice also builds the soil's health and its ability to hold moisture. Traditional plowing and tilling, on the other hand, disturbs the soil, leaving it unprotected and allows more erosion to occur. 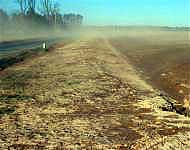 Cover crops are planted to absorb excess fertilizer left in fields after the main crop is harvested. 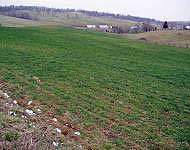 Conservation practices, frequently called best management practices, or BMPs, are tools that farmers can use to reduce soil and fertilizer runoff, properly manage animal waste, and protect water and air quality on their farms. Often these tools can help improve a farmer's bottomline as well by reducing operational costs.