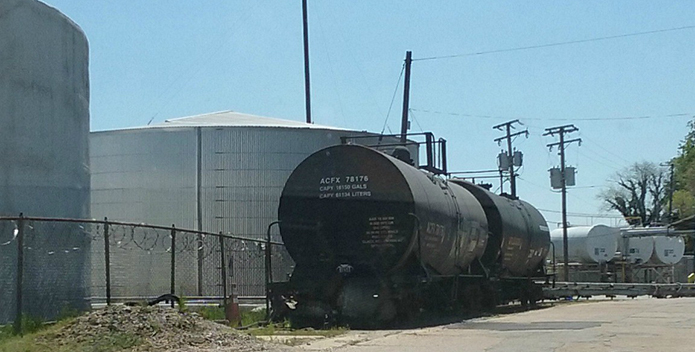 Hopewell, Virginia has many manufacturing and industrial areas, resulting in huge expanses of impervious surfaces that speed polluted runoff to the nearby Appomattox and James Rivers.

Located near Virginia's capitol city of Richmond, the City of Hopewell sits on 11 square miles at the confluence of the Appomattox and James Rivers. The city developed into an industrial hub in the early 1900s, with many manufacturing giants building their factories in Hopewell, including Dupont, Honeywell, Evonik Industries, Smurfit-Stone, and Hercules. As a result, the city has many commercial corridors that were constructed prior to requirements for stormwater management, resulting in large expanses of impervious surfaces. Pollution due to decades of commercial use and economic disinvestment has reduced the environmental and aesthetic benefits local waterways could provide for residents.

CBF's Hopewell Restoration Project will add important green infrastructure practices to Hopewell's environs that will allow rainwater to slow down and sink in to the ground, helping to mitigate routine flooding of areas within this aging community, while creating additional green space for its more than 23,000 diverse residents to enjoy. It will also help build awareness of these practices in the community, creating support for future green stormwater solutions.

In addition to damaging environmental consequences, stormwater runoff can cause significant health and even economic problems for Hopewell citizens due to bacteria pollution. The Appomattox River was initially placed on the Virginia Department of Environmental Quality's Impaired Waters Report in 1996 and the entire watershed has been on the report since. The Virginia Department of Health has also placed the Appomattox River in Hopewell on its fish consumption advisory list for 22 species of fish because of PCB and Kepone contaminants. In addition, urban areas such as Hopewell, which feature many hard paved surfaces, can face an increased flooding risk as runoff cannot easily sink into the ground. This can cause repeated and costly damage to homes and businesses.

Stormwater from impervious surfaces is one of the city's biggest water pollution issues. Unfortunately, 19.5 percent of Hopewell residents live in poverty. Because of this level of poverty, it is critical that stormwater management techniques necessary for this urban area to meet its water quality goals are accessible, easy to install, and affordable.

Increasing forested urban areas helps filter water runoff and slow soil erosion, while creating cooler temperatures and beautifying streetscapes. CBF will work with the Virginia Department of Forestry to conduct a GIS-based urban tree canopy assessment for Hopewell and host a roundtable discussion on ways to expand the city's tree canopy. Project partners will also assist residents in forming a community tree stewardship group to obtain funding and momentum to increase the city's tree canopy. We will also work with the city and Keep Hopewell Beautiful to attain a Tree City USA designation and identify sites to plant 100 additional trees to increase the city's canopy.

CBF is thankful to the National Fish and Wildlife Foundation for funding the Hopewell Restoration Project. We are also appreciative of our partners that are helping CBF meet the project deliverables, including the City of Hopewell, especially the Department of Public Works, the Hopewell Regional Wastewater Treatment Facility, and the Department of Recreation and Parks; Friends of the Lower Appomattox; Hopewell Downtown Partnership; Kiwanis Club of Hopewell; Prince George Master Gardeners; Virginia Department of Forestry; and Virginia State University.