The Chesapeake Bay Foundation (CBF) needs your help–and your oyster shells–to restore native oysters in the Chesapeake Bay. Donate your empty shells to CBF so we can recycle them into more oyster reefs and repopulate the Bay with more oysters. Oyster shells are literally the foundation of our reef restoration efforts!

We turn 2,000 bushels of recycled oyster shells each year into habitat for millions of oysters planted in the Bay and its rivers. Once the recycled shells are cleaned and cured, CBF places them in huge water tanks containing millions of microscopic oyster larvae, which then attach to the shells. On average, each recycled shell can become home to dozens of those baby oysters, called spat. CBF provides the spat-on-shell to its oyster gardeners and plants them in rivers and the Bay to grow and expand oyster reefs.

Oyster shells are becoming increasingly scarce. Through the Save Oyster Shells recycling program, shells that would typically be thrown away are saved and used in a variety of oyster restoration projects. 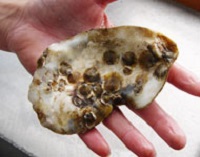 Your shells are used as homes for baby oysters (spat) like the shell in the photo. We place your recycled shells in tanks of water with millions of microscopic oyster larvae swimming and attaching to the shells. After a few days the spat-on-shell will be used to restore oyster reefs.

See the program in action on these local television news reports

CBF has the following drop-off locations in Maryland.

To learn more about how you can become involved in the oyster shell recycling program please contact Dan Johannes at djohannes@cbf.org or 443-482-2174.