A Chesapeake Bay Recovery: Half Empty or Half Full?

The following article is reprinted with permission from Chesapeake Quarterly 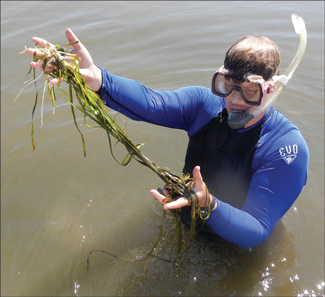 Grass species returning to the Flats include redhead grass, coontail, watermilfoil, water stargrass, and this strand of wild celery found by Debbie Hinkle, a research technician with the University of Maryland Center for Environmental Science.

IS THE HEALTH OF THE CHESAPEAKE BAY getting better or worse? Is the Bay cleanup campaign a success or a failure? Or something in between? Hard questions to answer, especially in light of good news about bay grasses and blue crabs and bad news about rising sea levels. Let's try a simpler question: is the Bay recovery picking up speed?

The Bay cleanup began in the 1980s because there was so much evidence during the 1970s that the health of the Chesapeake was declining. Bay grasses were disappearing, and so were striped bass and shad and oysters, and blue crab harvests were up-and-down affairs. The water was getting cloudier and the dead zones of low oxygen were growing larger every summer and lasting longer. Newspaper headlines were asking the question: "Is the Bay dying?" And the Chesapeake Bay Foundation was growing into a powerful nonprofit education and lobbying force by building on a slogan that was really a plea: "Save the Bay."

In 1983, nearly 30 years ago, the cleanup campaign was launched at a meeting that included environmental leaders; state and federal officials; and the governors of Maryland, Virginia, and Pennsylvania. One primary focus was pollution from excess nutrients like nitrogen and phosphorus, the force behind the dead zone, the darkening waters, the bay-grass dieoffs. In 1987, exactly 25 years ago, the states and the federal government first committed themselves to specific goals and deadlines: a 40 percent reduction in nutrient pollution by the year 2000. When that deadline was missed, another was set: 40 percent by 2010. And when that was missed, another goal was set: 40 percent by 2025. Maybe this time, it would be different: a voluntary approach was replaced by a mandatory regime with the Environmental Protection Agency enforcing a "pollution diet" for the Bay that carries penalties for insufficient progress.

Now 30 years out from that first pledge, the results seem mixed: nobody is running headlines asking whether the Bay is dying, but nobody's saying it's been cleaned up. With the public reading headlines about missed deadlines, some leaders in the environmental and scientific communities worry the campaign could start losing ground. "What worries me the most is political complacency," says Will Baker, president of the Chesapeake Bay Foundation. "I don't think we'll get another chance if we fail," writes Don Boesch, president of the University of Maryland Center for Environmental Science (UMCES).

This 2025 deadline may be the last chance for the Chesapeake Bay cleanup. It's hard, after all, to keep building a campaign on a slogan that sounds like an excuse. "It could have been worse" doesn't make an inspiring call to action — even if it's true.

But now there are signs the ecosystem is beginning to respond — in fits and starts, with ups and downs, in some places and not others. Water quality has improved in some of the Bay's largest rivers; underwater grassbeds have expanded dramatically in several of those rivers; and in the mainstem, dead zones of low oxygen seem to be shrinking more than we knew, if less than we hoped. Stripers and yellow perch and blue crabs have been rebounding, with natural fluctuations, from historic low points for those species. Even oysters in certain areas have shown some signs of recovery.

A more upbeat slogan might be: "We may be halfway home." It seems accurate enough. The most thorough accountings to date show that nutrient pollution — first targeted for a 40 percent cutback — has now been reduced by slightly more than 20 percent. The cleanup campaign is clearly but slowly cutting into the nutrient inflow. Cities and towns are upgrading sewage plants and stormwater systems. Many farmers are adopting practices like manure pits, nutrient management plans, and winter cover crops. Nearly half the cutback on nitrogen pollution came from tough enforcement of the Clean Air Act, an approach that forced power plants, factories, auto companies, and states to work harder at controlling air pollution.

As a campaign slogan, "halfway home" may be even more hopeful than you think. According to some ecologists, ecosystem recoveries, like ecosystem declines, can pick up speed pretty quickly once they're well started.

Underwater grasses, for example, recently expanded fourfold in only six years up on the Susquehanna Flats near the head of the Bay, a recovery scientists called "amazing." Behind that sudden rebound were factors like good weather and better water quality, the latter resulting from more controls on both land-based and airborne pollution.

Positive feedback, however, is a sword that cuts two ways, according to Michael Kemp, an ecologist at the University of Maryland Center for Environmental Science Horn Point Lab. When things are going bad (when bay grasses are starting to disappear), the feedback will make them worse (they will disappear faster). But when things are going better (when bay grasses are starting to come back), then things will get better faster (more grasses will come back). When the glass is half empty, Kemp likes to say, it is more than half empty. And when it's half full, it is more than half full.

Feedback may also be at work at a slower pace along the Potomac, the Bay's second largest river, where grassbeds have been reappearing along coves and shorelines that went bare back in the 1970s. The campaign to clean up the Potomac, "the nation's river," dates all the way back to 1965 when President Lyndon Johnson called the Potomac "a national disgrace" during his State of the Union Address. Johnson helped set the country and the Congress on a course to eventually pass a Clean Water Act that would call for "fishable, swimmable waters" in all American rivers.

The key steps to cleaning up the tidewater reaches of the Potomac River included a series of expensive upgrades to the Blue Plains Advanced Wastewater Treatment Plant in Washington, D.C. In 1980, the upgrade was a new system to reduce nitrogen, in 1982 it was new filters to reduce phosphorus. By 1983 underwater grasses, led by an exotic species named hydrilla, began to appear in the river. By 1985 a dozen species were growing, most of them native species. Feedback seemed to be kicking in. Since 1996, through up years and down years, grassbed coverage has increased fourfold in the upper reaches of the tidal Potomac.

It's not easy, however, to draw systemwide lessons from local successes, says Bob Orth, the scientist at the Virginia Institute of Marine Science who's been running annual aerial surveys of the grassbeds since 1984. "Most of the effects are local," he says, "because all of the tribs have different watershed characteristics." Where local watersheds have reduced nutrient inputs — as they have in Gunston Cove and Lynnhaven Inlet in Virginia and in the Patuxent River in Maryland — bay grasses have often responded, helping "positive feedback" kick in. So maybe those local successes add up to a useful lesson: systemwide recovery may be a piecemeal process, a river-by-river rebound.

The grassbeds of the Bay, however, hold another, more sobering lesson: natural forces like weather and climate can drive ecosystem declines so forcefully, they nearly overpower human campaigns for environmental restoration. From 1984 to 1993, underwater grasses were expanding in the southern Chesapeake Bay, ranging from the mouth of the Bay all the way up to the mouth of the Potomac. The key to their comeback, says Orth, was better water clarity, the result of a series of dry years when low river flow washed less sediment and nutrient pollution into the Bay. When the weather turned around in the mid 1990s, dousing the watershed with wet, high-flow years, the bay-grass recovery turned around, at least in the lower Bay. And feedback probably kicked in to push grasses down. Sometimes the glass is more than half empty.

Climate forces, on the other hand, can sometimes speed up ecosystem recoveries. A change in climate-driven wind patterns, for example, may soon help shrink that dead zone of no-oxygen water that appears along the bottom of the mainstem Chesapeake every summer.

Southerly winds are becoming more frequent in the new pattern, as frequent as they were before the 1980s. One result: as winds out of the south sweep up the long fetch of the mainstem Bay, they tend to cause vigorous mixing of Bay waters, and that mixing hauls those lower, oxygen-poor waters up for air. The dead zone could start to shrink.

Changes in long-term wind patterns are, of course, well beyond the reach of any Bay cleanup campaigns. Such patterns are tied to shifts in large-scale climate patterns such as the Bermuda-Azores High, which is part of the North Atlantic Oscillation. And those air pressure cycles are altered by changes in sea surface temperatures, including the long-term cycles of warmings and coolings known as the Atlantic Multi-decadal Oscillation. So the dead zone in the middle of the Chesapeake may be indirectly tied to water temperatures in the middle of the Atlantic Ocean.

That's a hard truth, but a hopeful one. "This cycle in my lifetime will probably shift back," says ecologist Michael Kemp. If there is less nutrient pollution flowing into the Bay when that shift occurs — and there's evidence the shift has already begun — then the dead zone with its hypoxic waters could start shrinking faster. "So the Bay all of a sudden is going to have less hypoxia per unit loading (of nitrogen) than what we expected," says Kemp.

Climate and weather clearly matter. But so do good science and smart management — and they are in our control. They mattered a lot in the rebound of striped bass and blue crabs, two iconic Bay species whose populations are driven in part by climate-forced wind patterns, in part by management decisions. The striped bass recovery grew out of a controversial, science-based moratorium on fishing, followed up by stocking of hatchery-spawned fish and a quota system imposed on both commercial and recreational fishermen. As a result: striped bass populations increased nearly eightfold over two decades. The recent blue crab recovery followed a science-based cutback on the harvesting of female blue crabs. Populations of blue crabs increased nearly threefold in just five years.

Bay grasses, blue crabs, the dead zone — scattered successes like these may be adding up to something more than the sum of their parts. "The Bay is starting to do better, modestly, modestly, on the increments," said Will Baker, president of the Chesapeake Bay Foundation, while addressing a meeting of Maryland environmentalists earlier this year. "It is going in the right direction."

Direction matters. Because there seems to be another kind of feedback at work, a feedback between climate forces and cleanup campaigns. When climate forces start giving us boom years for bay grasses and blue crabs and stripers, then smart, science-based management can magnify the booms. And speed up the Chesapeake Bay recovery. When the glass is half full, it may be more than half full.