Fixing the Pipes in Charm City 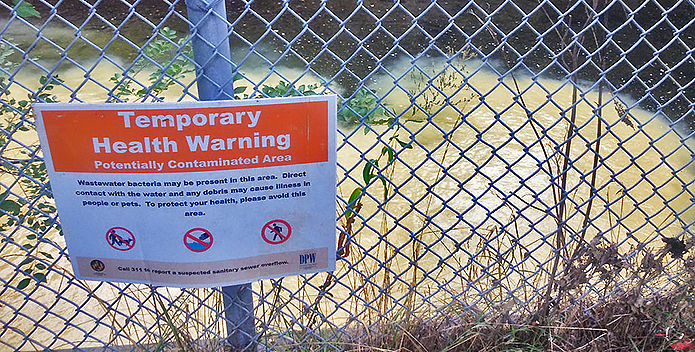 Photo of a sewage outbreak in the Jones Falls, August 2015.

One hundred and fourteen years ago, spring was an exciting time in Baltimore. On April 7, 1904, the Maryland legislature passed the Sewage Enabling Act, allowing the city to construct its first modern sewage system and replace the 80,000 cesspools in use until that point. Workers tunneled into the earth and by 1915, the system was fully operational. Those pipes were cutting edge in twentieth century Baltimore, but then, so was the Model T Ford. The Model T has evolved beyond recognition, but over a century later, Baltimore is still using the same sewage system. It would be an understatement to say that it's age has started to show. The city agrees: It's past time for an update.

Although the Inner Harbor may turn a deceptive shade of blue-green during a dry spell, many locals know better. It's known that the failing sewer system frequently releases human waste directly into the Chesapeake Bay and that the harbor is home to not just fish and trash but dangerous levels of fecal coliform bacteria. Unfortunately, not all residents have the luxury of calling this an invisible infrastructure crisis. For those at the mercy of structural overflows that occasionally flush sewage right into their homes, it is far from invisible. And then there are others who simply are ignorant to the public health ramifications, such as those kayaking, fishing, or even swimming in these public waters.

Back in 2002, the city declared it would "fix the pipes." Although some improvements were made, backups are still far too common and a good rain can dump thousands of gallons of raw sewage into Jones Falls. In the original plan, city officials spent $900 million on planning and troubleshooting, and $350 million on the actual project. But after delays, only a fraction of the promised improvements were made.

Two years ago, the 14-year deadline to fix the system came and went. The EPA recently granted the city an extension on their old timeline in the form of a modified consent decree and a new game plan: the "Headworks project." The new goal for project completion is now 2030. Along with system repair, the plan includes "measures regarding basement backups, water quality monitoring, and transparency." Residents will receive support from the new "Expedited Reimbursement Program" which will pay homeowners up to $2,500 per occurrence for documented disinfection and cleaning costs. While these plans are cause for optimism, residents have reason to be skeptical after the old decree failed and the current lack of transparency.

According to a 2015 investigative report published by the Environmental Integrity Project, Baltimore notified the public only 19 percent of the time when failing pipes spilled 10,000 gallons or more between 2010 and 2015. To restore the public trust, the city needs to improve transparency about spills,funding, and status of the Headworks project. And citizens need to help officials fight the gridlock of the recent past. We need to ensure that the city meets project deadlines, pays promised basement backup funds, and keeps all promises made in the modified consent decree. So Baltimoreans—take advantage of the reimbursement, show up for those stakeholder meetings, and make your voices heard during public comment periods.