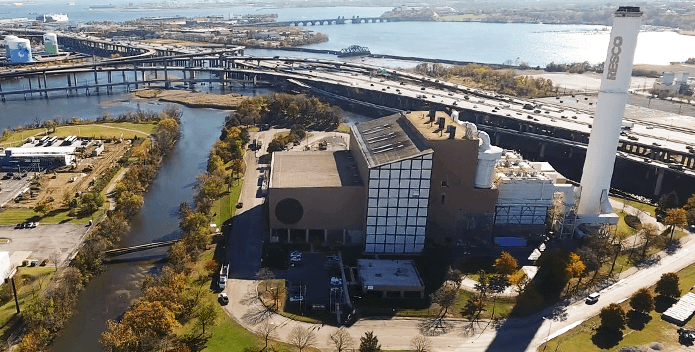 Nitrogen oxide emissions from Baltimore's Wheelabrator incinerator are a major contributor to health and water quality issues in the city and in downwind counties.

The Wheelabrator incinerator in Baltimore burns the majority of the city's garbage and is its single largest source of industrial air pollution. The plant, whose smokestack rises above I-95 near the Baltimore sports stadiums, also burns trash from Anne Arundel and Howard counties.

The Maryland Department of the Environment (MDE) adopted regulatory changes on December 6, 2018, that will cut Wheelabrator emissions by approximately 200 tons a year, or roughly by one fifth. The Chesapeake Bay Foundation (CBF) joined other environmental groups and community groups in pushing for the reduction. CBF and its partners, as well as many Baltimore residents, took part in a public hearing on the proposed regulation on September 18, 2018. After extensive study of the plant, CBF applauds MDE for requiring more stringent emission limits for the short term, but believes Wheelabrator can do even better.

In 2016, the plant produced about 1,100 tons of nitrogen oxides (NOx). This compound is harmful to both people and the Chesapeake Bay. It contributes to soot and smog that irritate the respiratory system. A study commissioned by CBF concluded that living near the incinerator in Baltimore is similar to living with a smoker. Fine particles from the smokestack's emissions also fall beyond the city, causing an estimated $55 million annually in health problems.

When it falls into the waters of the Bay, or is washed there in storms, NOx and other forms of nitrogen trigger a chain reaction of algae growth, oxygen depletion, fish kills, and other tragic results. About one-third of the nitrogen entering the Bay comes from airborne pollution, mostly in the form of nitrogen oxides (NOx). NOx comes from the combustion of fossil fuels, primarily from power plants and vehicles.

It is estimated that Wheelabrator NOx emissions lead to the deposition of about 47 tons of nitrogen per year to the land and waters of the Chesapeake Bay watershed under the prior, less rigorous emission limits.

Wheelabrator was the fifth-largest emitter of nitrogen oxides in Maryland in 2016, and is only one of several sources of NOx pollution in the state. The largest source of NOx in Maryland in 2016 was the Lehigh Cement plant in Carroll County (2,700 tons). Unlike Wheelabrator, the emissions rules for other facilities currently are not up for renewal by MDE. Until the end of 2018, the standards affecting Wheelabrator, referred to as NOx RACT (for Reasonably Available Control Technology Limits for Nitrogen Oxides Emissions from Large Municipal Waste Combusters), hadn't been revised in over 20 years.

CBF has pushed for cleaner emissions at Wheelabrator as part of our broader initiative to ensure that air pollution is reduced sufficiently to meet the regional plan to clean up the Chesapeake Bay. Yur continued support and membership funds the research for this important work. See CBF's formal comments to MDE, plus the reports of CBF experts, below .

The new regulation requires the reduction of NOx emissions at Wheelabrator to 150 parts per million for a 24-hour average with an effective date of May 1, 2019. This limit is consistent with similar requirements for large municipal waste combustors in Mid-Atlantic and New England states. A further reduction to 145 parts per million would go into effect on May 1, 2020.

But additional investment in existing technology at the plant could result in even greater reductions. Large municipal waste combustors elsewhere have demonstrated it can be done. CBF has urged that as part of a longer-term feasibility study on emissions reductions at the incinerator, MDE consider human health and environmental impacts to guide future limits. We also pushed for stricter limits as soon as possible. We are pleased that, in addition to the interim reduction in NOx emissions, MDE has required Wheelabrator to undertake such a feasibility study of methods and technologies for additional control of NOx emissions from the facility.

Wheelabrator must submit a study to the department no later than Jan. 1, 2020 describing its options for implementing additional NOx emissions reductions. This will be used to set future NOx limits in 2022.

January 1, 2020 - Wheelabrator must submit a study to MDE describing its options for implementing additional NOx emissions reductions. This will be used to set future NOx limits in 2022.